You can see an awful lot of what Amsterdam has to offer in just a few hours, if you plan and prepare carefully. 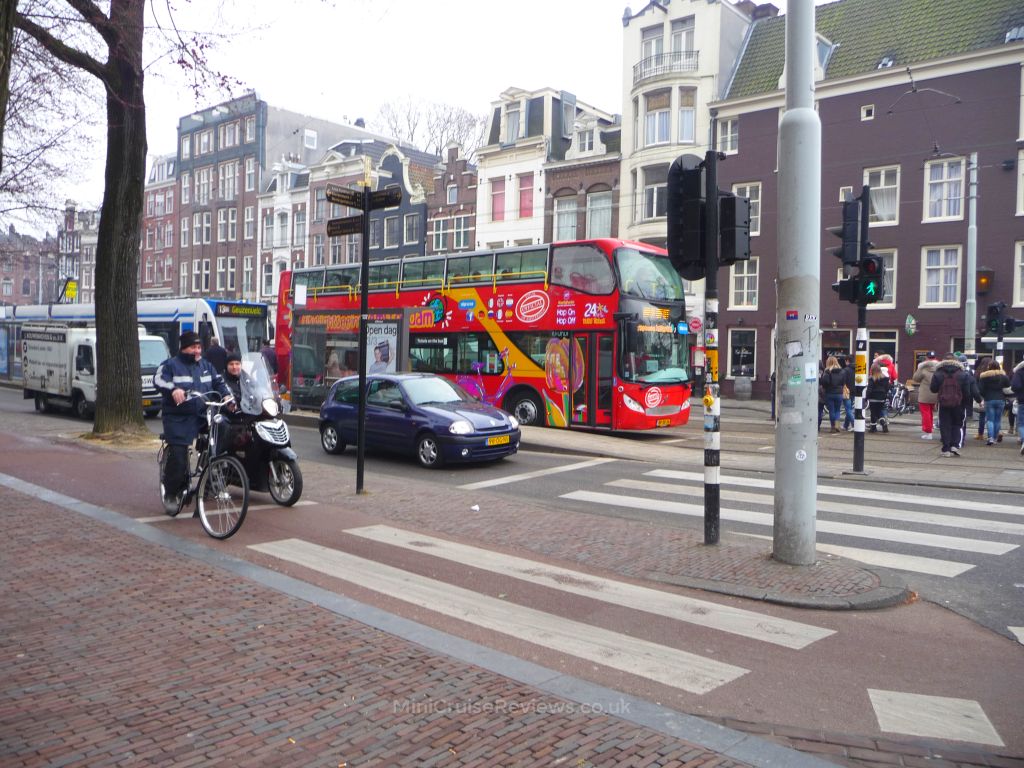 Amsterdam is huge! The A10 motorway surrounds the city almost in a neat circle. It spans around 7 miles (about 11 kilometres) north to south, east to west.

The P&O Ferries coach stops just outside the Amsterdam Central train station which sits to the north of the central area.

I wanted to get an overview of the city so I pre-booked a City Sightseeing hop-on-hop-off bus tour online. There was a bright red bus waiting just behind the drop-off location which was convenient!

Their route dictated my day but as did the frequency of the buses (between 30 and 45 minutes between buses). To save time I opted to walk a fair distance, often skipping stops on the shorter legs of their route.

Starting a Central Station, the route passes the Royal Palace, the Anne Frank House, the museum area, past the famous Heineken museum, on to the Flower market before passing along the Red Light District and then looping back to the train station. A full loop takes around an hour depending on traffic which seemed to get heavier as the day wore on.

So here is what we crammed into my time exploring Amsterdam.

The most striking thing about Amsterdam is its diverse architecture. There is an enormous range of buildings to admire. The Central Station is an impressive red brick building. A bit further beyond you can see the striking modern design of the NEMO Science Museum which looks like the bow of a ship. Across the road from the end of the station is St Nicolaaskerk which nestles amongst smaller buildings.

The Schreierstoren is located just around the corner and used to be part of the city wall of medieval Amsterdam.  Today this building (which translated means Weeping Lady) is a café.

Dam Square is an impressive area, with the Royal Palace and Nieuwe Kerk on one side and the National Monument on the other which was built in 1956 to remember the victims of World War II. Here you can find Madame Tussauds too.

Everywhere you turn in Amsterdam there is an impressive architectural sight to behold. I loved the meandering canals lined with Dutch buildings, each designed with personality and charm.

The most iconic art installation has to be the "I Amsterdam" letters which are a tourist magnet. This artwork was something I simply had to visit in front of the Rijksmuseum. The letters measure two metres in height and over 23½ metres in width.

`Visitors are encouraged to interact with the artwork and photographers are invited to get creative with the letters. I was there early in the morning, but it had already drawn in plenty of tourists, limiting the possibility of a "clean" photograph. There was also a lot of construction work going on around the museum's vicinity to improve the area's aesthetics.

The Homomonument can be found just down the road from the Anne Frank House and is a monument to commemorates all persecuted gay men and women. The memorial opened in 1987 and looked far more impressive from above as three small triangles form one large triangle. Each point symbolically looks towards a significant area: the National War Memorial at Dam Square, the Anne Frank House and the COC Nederland headquarters, home to the Dutch gay rights group founded in 1946.

For investments, head over to the Spiegelkwartier (the Mirror Quarter) which is affectionately known as the art and antique district of Amsterdam.

The Anne Frank House is a hugely popular attraction, but very long lines form very early in the day. It is a minuscule attraction, and so the numbers who can access it are strictly limited, inevitably leading to lengthy queues. I could not spare enough time to wait in line so had to skip it. On my next trip to Amsterdam, I would pre-book tickets online.

The Museumplein (also known as the Museumpromenade) is a large expanse of greenery surrounded by museums. The Rijksmuseum is a Dutch national museum dedicated to arts, crafts, and history. The Van Gogh Museum documents the works of Vincent van Gogh. When I visited, the museum had been temporarily moved to the Hermitage Museum while renovation works were carried out.

The Stedelijk Museum displays classic modern and contemporary art, and the Diamond Museum is a shrine to sparkling gems. Also on the Museumplein is the Concertgebouw which is a concert hall.

Every city seems to be called the Venice of the North, but Amsterdam can truly stake a claim to it. Amsterdam has an excellent network of meandering canals, and there are several operators available offering canal boat tours. As you would expect, these span the same tourist areas as the hop-on-hop-off bus services do, although they do offer a unique perspective on the city.

For part of the day, I turned into a bridge spotter and tracked down the infamous Magere Brug which translates as "Skinny Bridge".  It is an iconic bridge, built in 1934, and painted in white. I did not see the 1,200 light bulbs turned on as I was not there during the evening but I would love to see this sight on my next cruise and stay holiday.

Let's talk coffee shops. Not coffee shops but "coffeshops". These are the same as coffee shops you will find in any city, with the small exception that they also sell soft drugs.

According to I Amsterdam "35% of tourists who come to Amsterdam also visit a coffeeshop during their stay" so it' is a very popular past time amongst tourists.

Needless to say, Amsterdam has built up a reputation amongst tourists for its liberal attitude towards soft drugs such as cannabis. It is not something I wanted to check out, but I understand some people travelling to the eclectic city of Amsterdam want to explore, which is why I mentioned it here.

Amsterdam isn't famed for Dutch cuisine. In other cities I have visited I could identify national dishes and local delicacies. Not in Amsterdam.

The city is full of a wide variety of restaurants covering all tastes and palettes. I discovered a highly rated pancake shop but decided to follow a recommendation and visited a chocolate shop and café instead.

Chocolatl is a small boutique shop packed with a wide variety of artisan chocolates from all over the world. Located just beyond the Nine Streets area, their speciality appeared to be the finest in chocolate bars from around the world made with wholesome, natural ingredients. I enjoyed a freshly made hot chocolate rivalling my favourite chocolatier's brew in Brussels. The shop is off the beaten track, but worthwhile visiting if you love chocolate.

Amsterdam offers a huge choice of beers and fans should head to the Heineken Museum. Occupying a large building next to a canal, this is a popular destination for many tourists. The Heineken experience is a self-guided tour lasting around 1½ hours and takes place inside the former brewery. Learn how beer is produced from start to finish and sample a refreshing Heineken lager beer.

Amsterdam is famous for the diamond trade so a visit to the jewellery shops is a must.

Kalverstraat is a pedestrianised area that runs for nearly half a mile, connecting Dam Square to Muntplein square. It is the main shopping area with all types of shops located here. It commands high rents and also happens to be the most expensive street on the Dutch version of the Monopoly board.

Muntplein square leads onto a disappointing Flower Market in March. A row of greenhouse structures lined the canal, but most of them just sold the same bulbs and seeds. I expected to find an eclectic range of bulbs and flowers in bloom. Perhaps if I next visit in summer, the stalls will be different and packed with a rainbow of blossoms instead?

I stumbled across Magna Plaza, located behind the Royal Palace. It may have been one of the most beautiful shopping centres I have ever seen, but it lacked many shops to browse.

P.C. Hooftstraat is the place to go for high-end luxury purchases. Brands such as Cartier, Chanel, Dolce & Gabbana, Gucci, Hugo Boss, and Louis Vuitton have all set up boutiques in this street. This street is a short distance from the Rijksmuseum or the Vondelpark.

I am open-minded but honestly did not know what to expect of the Red Light District. Mental images conjured up by the name implies a dark and seedy underside of Amsterdam. Despite not being my scene, I firmly believe that when you visit a foreign country you have the golden opportunity to immerse yourself in the local culture and to learn about their country, values, views, and beliefs. As my sightseeing tour passed through the area, I thought it was worthwhile wandering a few of the streets by day.

I was pleasantly surprised to see the girls in shop windows were concentrated in one area, with countless adult themed shops interspersed amongst them.

The most eye-opening discovery was how liberally Amsterdam residents view the area. I expected it to be off-limits, yet kids played outside as if it were any other area of the city, oblivious to the scantily-clad ladies and triple X shops.

The District backs onto Oude Kerk and follows a canal. It is an abrupt intersection. I wandered around looking at the architecture before unexpectedly stumbling across women advertising their services in shop windows.

Some tourists consider this area as a great way to get to know the locals, and there is no doubt that some Stag and lads weekends have drifted over this way.

Whether you are looking to take advantage of the services offered or not, it is worth visiting this area in the day, irrespective of your views on prostitution. Observe how the Red Light District integrates within the area. Stick to the main canal and you will get a good feel for the area. Follow some of the side streets to see why this is known as the Red Light District (just in case you are wondering it is because of the red lights that glow above the shop windows where the prostitutes are advertising their services).

If you book a mini cruise and stay break, book an organised night tour of the Red Light District to learn more about this surreal district of the city care of a knowledgeable host.

For a more insightful view on the history of this area, the Sex Museum in the De Wallen area is worth a visit. The Prostitution Information Center (known as PIC) explores the Red Light District from a different perspective.

Amsterdam is a very welcoming city. Travel alone, take your partner or bring your entire family. It is an easy city to get around, and there is something for everyone to see and do.

Posted on Saturday 30th March 2013Friday 18th September 2020 by David Fiske
(Photo credit(s) to David Fiske)
Disclosure: P&O Ferries kindly supplied a half board mini cruise to Amsterdam. I paid for travel to and from the Port of Hull, car parking, incidentals onboard, and tours in Amsterdam. The opinions in this article are my own.