Pride of Bruges feels quite cramped inside, but still offers a good choice of dining and entertainment venues. 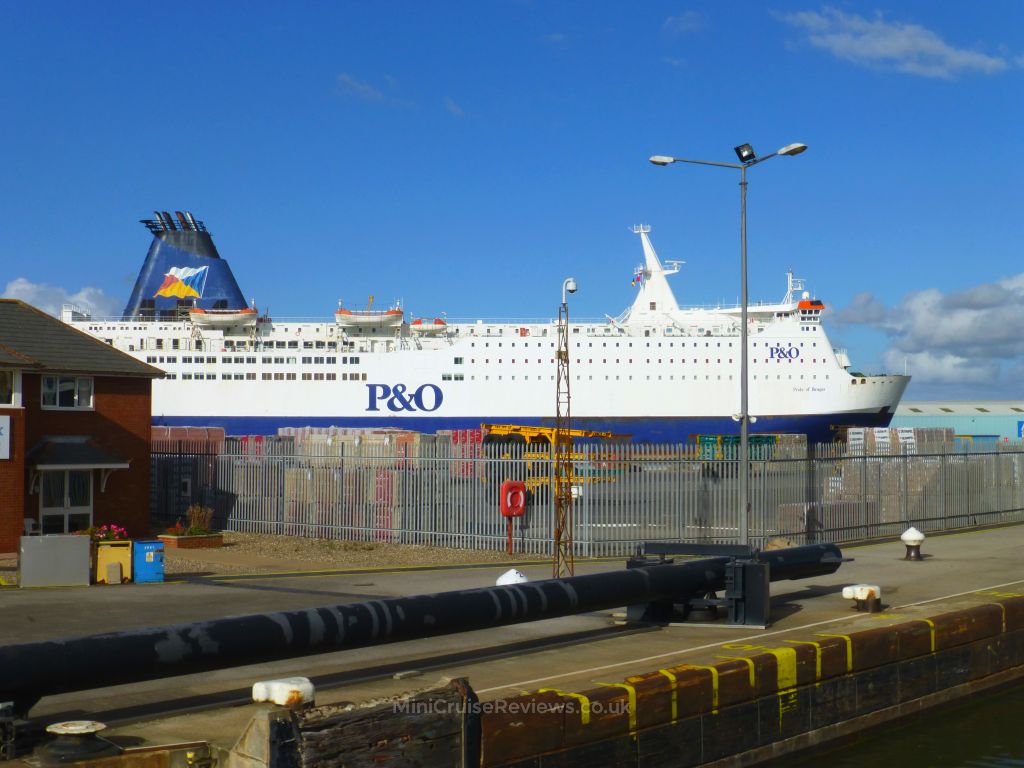 Pride of Bruges is a passenger and cargo ferry operated by P&O Ferries on the Hull to Zeebrugge route.

Pride of Bruges began life named Norsun in 1986. Builtby NKK Corp, Japan, it was originally for the operator North Sea Ferries who then later became P&O Ferries. It sailed on the Hull to Rotterdam route alongside sister ship Norsea.

In 2002 the vessel underwent modernisation before moving onto the Hull to Zeebrugge route alongside sister ship Pride of York. In 2003, Norsun became Pride of Bruges. Look carefully and you can still see the imprint of the Norsun name on the bow of the vessel, despite the layers of white paint that attempt to mask it.

Pride of Bruges and Pride of York sail in tandem daily throughout the year meaning you can book a mini cruise throughout the year on days to suit you. I sailed outbound on a Saturday night and disembarked in Hull on a Monday morning, spending all Sunday in Bruges.

Passengers board Pride of Bruges at the rear of Red Deck 5. It is home to the Sunset Show Lounge, a Bar, a redundant Casino, a Starbucks Coffee café, Shops, Reception, a Bureau de Change, and cabins to the front.

Go up a level to Blue Deck 6 and you will find a lounge and bar as well as a two cinemas. Cabins reside to the front of the deck.

The wine bar is on Green Deck 4. Aromas of freshly cooked food come from both The Brasserie à la carte restaurant and The Kitchen buffet restaurant. There is also a Quiet Lounge oddly placed opposite the noisy Children's Play Room. Cabins fill up the remainder of this deck.

The public space on Pride of Bruges feels restrictive although the outer deck space compensates. Open air spaces can be found at the rear of Red Deck 5 and right along the sides of Blue Deck 6. These areas are dominated by smokers, as there is no designated smoking space.

In comparison with Pride of Rotterdam, Pride of Bruges felt a lot more like a traditional ferry than a cruise ship. She is starting to show her age. She is noisy in motion and rattles and vibrates more than the younger Pride of Rotterdam.

On Pride of Rotterdam the majority of travellers sailing with me to Amsterdam were younger but on our Pride of Bruges sailing to Zeebrugge, there was a real mix of passenger ages.

I cannot source a good quality deck plan for the Pride of Bruges but instead I photographed the deck plan displayed onboard.

Here are some vital stats for the ship.

Despite her size, Pride of Bruges feels quite cramped inside. There are a small number of dining and entertainment venues on the ship but expect these to be busy.

Posted on Wednesday 5th October 2016Friday 18th September 2020 by David Fiske
(Photo credit(s) to David Fiske)
Disclosure: I paid for my trip entirely. The opinions in this article are my own.