Felison Terminal in Ijmuiden, near Amsterdam, continues to be a pleasure to transit through. 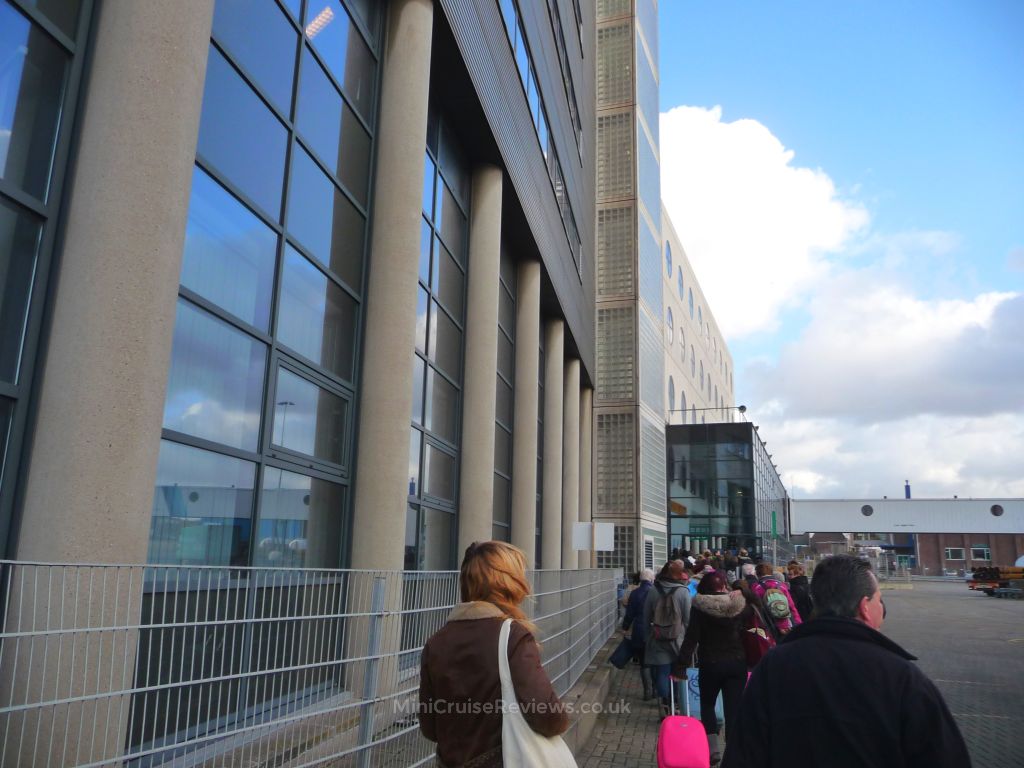 The DFDS ferry from North Shields, Newcastle, sails to Ijmuiden, 27 miles (about 43 kilometres)to the west of Amsterdam.

The Felison Terminal is recognisable thanks to its nautical-themed architecture and porthole windows. DFDS logos adorn the terminal.

Despite my fears about the weather, my sailing was remarkably pleasant. Admittedly there was a gentle rocking motion throughout the journey, but the Captain hugged the coastline as much as possible for a more comfortable crossing. Even so, I was glad I dosed up on travel sickness as a precaution.

I enjoyed a mostly pleasant night's sleep. There was an annoying repetitive knocking sound from the cabin next door caused by a swaying door.

In the morning I had an opportunity to explore the ship in daylight, peering out of the sea salt covered windows at the Netherlands coast.

The ship docked at Ijmuiden at 12 o'clock CET rather than the scheduled 9.30 am CET due to the weather.

Having visited the Felison Terminal before, I knew what to expect. Just like the Port of Tyne terminal, nothing had changed. A tall truck had damaged the passenger gangway so foot passengers were asked to disembark through the transport entrance on deck three. After a 20 minute delay for the car decks to empty, passengers were eventually allowed to leave.

Immigration checks were swift, and I boarded the awaiting Van Dam coach bound for Cologne. As a large group of 49, we embarked on the 3½ hour bus journey to Germany.

The coach did not stop along the route as there was a toilet on board together with a small selection of paid-for tea and coffee drinks.

The roads were free flowing apart from a slight delay on the outskirts of Cologne due to heavy traffic. The bus eventually stopped right outside the Marriott Hotel Cologne.

After checking out of the hotel, the coach left Cologne at around midday and arrived back in Amsterdam 3½ hours later.

Too early to board the ferry, the driver unexpectedly diverted into central Amsterdam. He delivered an impromptu and informative tour of the city.

I arrived back at Ijmuiden at around 4 pm ready to check-in. Before long I boarded Princess Seaways, once again through the bow.

The return sailing to Britain was much calmer. The ferry arrived in Newcastle at 9 am beneath beautiful wintry skies. A short queue formed at the UK Border Agency checkpoint. By 9.30am I was sat in my car, ready for my journey home.

Ijmuiden's Felison Terminal is a clean and compact port that is efficiently run.

Posted on Tuesday 27th December 2011Friday 1st November 2019 by David Fiske
(Photo credit(s) to David Fiske)
Disclosure: DFDS kindly supplied a half board mini cruise to Cologne, including overseas transfers and a hotel. I paid for travel to and from the Port of Tyne, my hotel, car parking, incidentals onboard, and meals and incidentals overseas. The opinions in this article are my own.