Felison Terminal in Ijmuiden, near Amsterdam, is an efficient port to travel through. 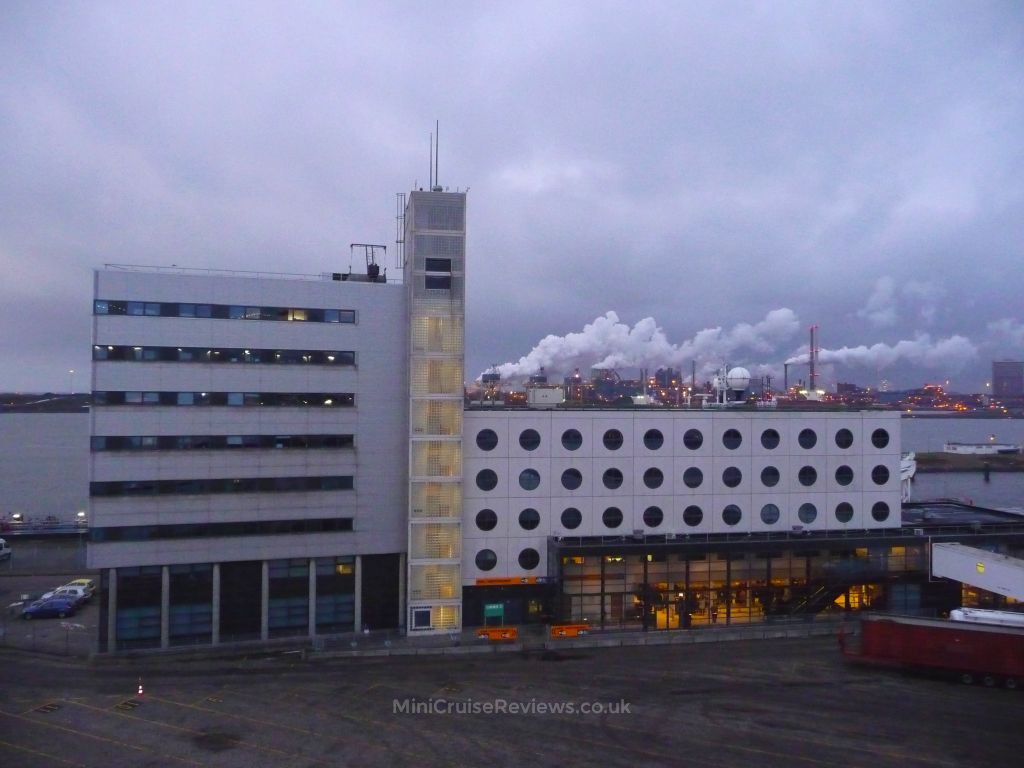 The DFDS ferry from North Shields, Newcastle, sails to Ijmuiden, 27 miles (about 43 kilometres) west of Amsterdam.

The Felison Terminal is recognisable thanks to its nautical-themed architecture and porthole windows. DFDS logos decorate the terminal.

As the ferry departed Newcastle and encountered rough seas, I realised how ill-prepared I was. I spent the night racing between my bed and the bathroom.

Top tip: Take travel sickness tablets just-in-case! It is better to be safe than sorry.

Thankfully by the morning, the seas were a lot calmer, and I enjoyed a hot buffet breakfast.

A wake-up announcement broadcast at around 8.00am CET with a couple more after that announcing last minute shopping opportunities in the duty-free shops.

The vessel arrived at the port of Ijmuiden, Amsterdam, at around 9.30 am CET. Ijmuiden Port sits to the north-west of Amsterdam and is around 20 miles (about 32 kilometres) from its centre. It took around half an hour to safely dock and get the walkways and cargo doors open.

Demand for the lifts was high during disembarkation so opt for the stairs if you can.

I found several coaches waiting outside. Very helpful guides dressed in yellow directed passengers to the correct one. As I was on a mini-cruise break to Brussels, I had a different coach to those passengers who were day tripping to Amsterdam.

My coach driver went above and beyond what I had expected by delivering a guided tour of what we were passing along the journey to Brussels. She reeled off facts and figures as well as a bit of history and origins and translations of city names.

The coach itself was comfortable, quiet, and had tea and coffee making facilities as well as a toilet. The seats reclined, and the temperature was warm, despite the freezing temperatures outside!

The entire journey was around three hours, including a short break in a snow covered service station on the Belgian border.

My return transfer coach was on-time, and the group of around 20 had congregated in the hotel foyer.

Boarding was quick and easy. We had the same driver for the return leg which was great as we all felt like we knew her by now!

The return journey detoured past the famous Atomium attraction in Brussels which I sadly did not have time to visit during the stay.

The return leg was quieter as there was not much narration except for occasional recapping.

The coach stopped at the same service station for around half an hour to have a quick break outside of the coach before continuing back to Ijmuiden.

When we arrived at the port, the bus parked right outside the entrance doors so it was a case of stepping off the coach and into the terminal. The entrance is the same exit used for arrival. This time, you snake to the check-in desks which are on the right-hand side as you enter.

Check-in and Customs checks took no more than five minutes each, and then I had a half hour wait before I could board. Rows of seats fill the terminal. At the rear, there is a shop, a small café, and toilets.

Shortly after the scheduled boarding time, a queue formed. Mandatory passport and boarding card check complete, I headed up the escalator. A short walk along the walkway led me back onto the ship.

The return sailing from Amsterdam to Newcastle was calm and gave me the perfect opportunity to discover more of the onboard facilities.

A very peaceful good night's sleep left me refreshed. The ferry docked back in Newcastle port the following morning, again on time.

Ijmuiden's Felison Terminal is clean and compact, and is a pleasure to travel through.

Posted on Saturday 25th December 2010Friday 1st November 2019 by David Fiske
(Photo credit(s) to David Fiske)
Disclosure: DFDS kindly supplied a half board mini cruise to Brussels, including overseas transfers and a hotel. I paid for travel to and from the Port of Tyne, UK hotel, car parking, incidentals onboard, and meals and incidentals overseas. The opinions in this article are my own.