I battled with snow drifts and treacherous conditions to get to the ferry terminal in North Shields, Newcastle. 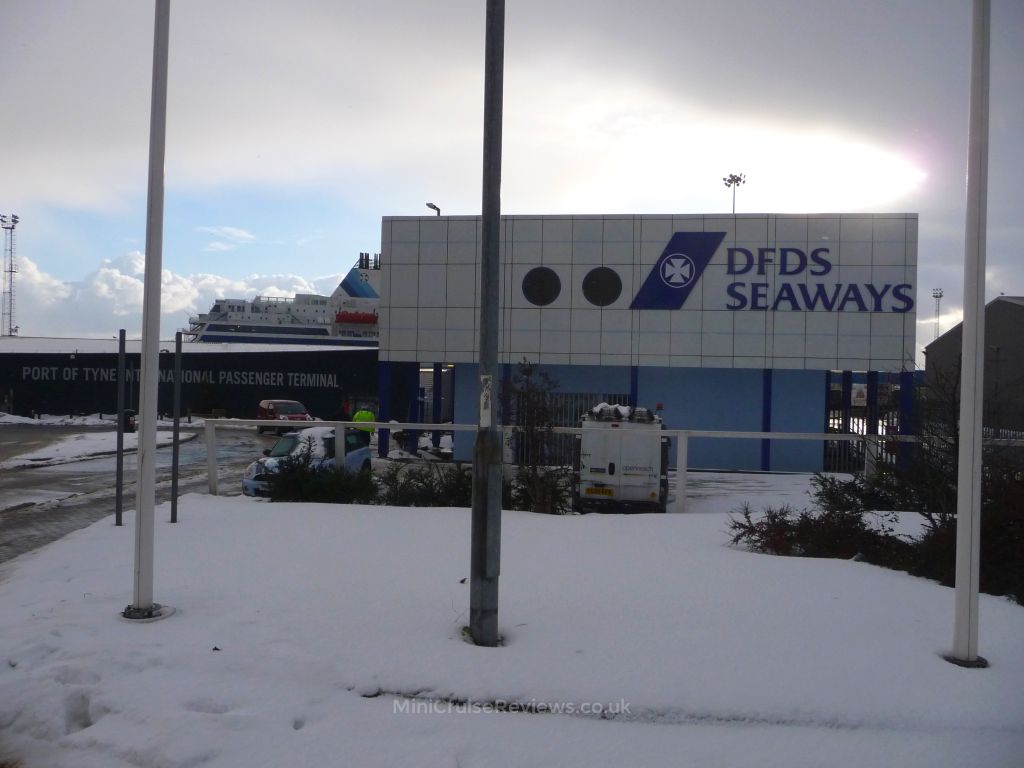 I had been eagerly counting down the days until my sailing, but little did I know that fate was not on my side.

December 2010 saw unprecedented snowfall, first in Newcastle (the departure port) and then the entire east coast of the UK. As I was travelling from Cardiff along the M1 and A1, I nearly didn't make it.

To break up a lengthy journey, I had booked into Sheffield Meadowhall Travelodge the night before the sailing. Blizzard conditions on the M1 set in shortly before we exited the motorway so I was relieved to be taking a short overnight break from the snow. After only just managing to drive into the hotel car park a new concern arose - am I going to be able to get back out?!

I woke up early to leave myself enough time to dig out of the car and get to Newcastle on time. Along my route, I passed many abandoned, overturned, and jack-knifed lorries.

The International Passenger Terminal at the Port Of Tyne is in the North East of England. It lies approximately 8 miles (about 13 kilometres) to the east of Newcastle-Upon-Tyne. It is a great location for those living in the North of England and Scotland although it can be a long drive from the South.

My journey from South Wales to the North of England made use of motorways and dual carriageways. I took the M1 up to Doncaster and then the A1(M) to Washington, before taking the A194(M) and A19 through the Tyne Tunnel. The port is around five minutes from the Tunnel.

If you are travelling from Scotland, follow the M74 from Glasgow along the A74(M). Take the A69 at Carlisle to cross the country. Alternatively, take the A68 from Edinburgh and follow the A696. You'll need to take the A1 along the east coast of Scotland through Berwick-upon-Tweed and Morpeth before dropping into Newcastle.

From the North West of England, take the A69 from Carlisle to Newcastle upon Tyne or the A66 from Penrith to Darlington. Join the A1(M) past Durham, Chester-le-Street and Washington onto Newcastle.

From South Wales, take the M4 and then M5 up to Birmingham. Follow the M42 to the M1 and head north. Follow the A1(M) through Darlington and Durham onto Newcastle.

From North Wales, take the M56 to Manchester, the M60 to avoid the city centre, and then the M62 past Rochdale and Huddersfield. At Leeds take the A1(M) north.

From the South West of England, follow the M5 north, then follow the directions from South Wales once you reach Junction 15.

From the South East and London take the A1(M) from Junction 23 on the M25. This road switches between the A1 and A1(M). Follow it northwards to Newcastle.

Car parking at the Port of Tyne

Parking is operated by the Port of Tyne and is relatively expensive but in line with many seaports and airports. It is, however, the closest parking you can get to the terminal which is a real plus point when you are wheeling your luggage through the snow! Parking fees can be paid by cash or credit/debit card upon return at pay stations inside the terminal or next to the car park.

When I visited the price was £12 per day (for each block of 24 hours) or £15 a day if you lost your ticket while on holiday.

There are other modes of transport you can use to get to the Port of Tyne.

Newcastle Railway Station is located to the South of the city centre and is easily accessible from across the UK. Once there, you can take advantage of the DFDS transfer bus which runs between Central Station and the port itself. There is a small fee for the trip, but it is much cheaper than a taxi.

As a guide, the journey from Edinburgh and Newcastle takes around 1½ hours. Hull is under three hours away, as is London. Plan your rail journey here.

Newcastle is also accessible by coach using National Express . These drop you off at the bus station allowing you to catch the DFDS transfer bus. Routes include:

Check-in at the Port of Tyne International Passenger Terminal was quick and straightforward.

As you go through the main doors to the terminal, you pass a shop on the left-hand side. Continue into the main lounge. To the right are the DFDS check-in desks.

I joined a very short queue. I collected my boarding card (which doubles up as a cabin key) and my dinner card (as I had pre-booked my meals). It is worthwhile pre-booking your meals as you can save money versus the onboard prices.

I collected a pack of vouchers for the pre-booked transfers and hotel accommodation in Brussels. Inside the pack, there was a comprehensive leaflet explaining everything we needed to know about the mini-cruise including when and where the transfers take place.

The large departure lounge offers plenty of comfortable seating. A café is next to the shop and serves light refreshments. There is also a Bureaux de Change and a large TV displaying the latest news headlines. As you would expect, the terminal also has toilet facilities. A pay machine for the car park sits just inside the doorway.

I checked in around an hour before I was allowed to board. I watched as several coaches arrived, each laden with passengers.

Around an hour before the ferry departure, boarding commenced. I let the queue subside before joining it.

I passed through security, presenting my boarding card and passport. I was lucky enough to receive a complimentary bag search care of Her Majesty's UK Border Agency. Embarkation took around 30 minutes.

I boarded King Seaways (formerly King of Scandinavia) where friendly staff greeted me and directed me to my cabin. Cabins are easy to find - the all-in-one boarding card/room key states the deck level and cabin number.

The Port of Tyne is very easy to reach by car. If you arrive by bus or train you will need to transfer from Newcastle city centre to North Shields. The terminal itself is spacious, with a shop and café, and plenty of seating.

Posted on Sunday 19th December 2010Friday 18th September 2020 by David Fiske
(Photo credit(s) to David Fiske)
Disclosure: DFDS kindly supplied a half board mini cruise to Brussels, including overseas transfers and a hotel. I paid for travel to and from the Port of Tyne, UK hotel, car parking, incidentals onboard, and meals and incidentals overseas. The opinions in this article are my own.