If you are heading to Denmark, make sure you take a look around Esbjerg, a small city with a rich maritime history. 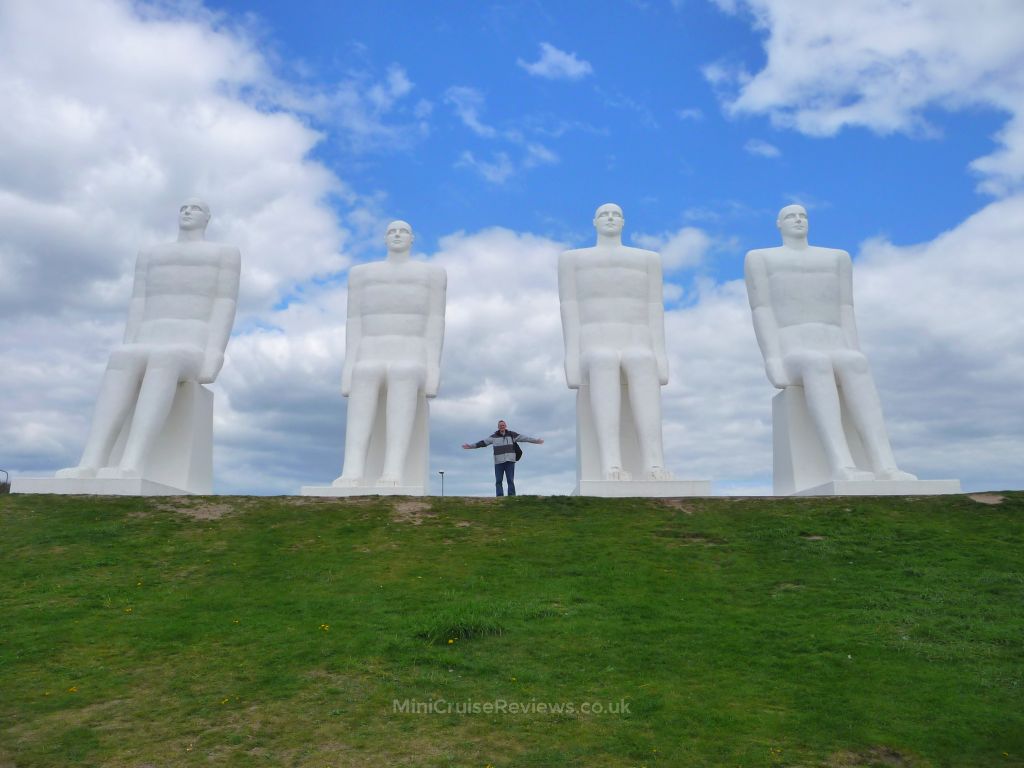 I left the ship at a different location in Esbjerg than the one I used to board in Harwich.

A quick stroll along the covered walkway leads to Customs where after a quick check of the passports I had officially arrived in Denmark.

After passport control, turn right to get out of the terminal. I foolishly headed straight forward through a set of double doors which lead to the car area of the port. Turning right before these leads through the DFDS office and out onto the open streets of Esbjerg.

From here, it's a short walk into Esbjerg city itself, walking to the end of the road, crossing a few streets and heading right. There is a handy map DFDS gave its customers on the mini cruise with directions into the city.

Historically, DFDS has not run many mini-cruise holidays to Esbjerg. Recently, these relaxed holidays are becoming more popular. However, the drawback is that while the Newcastle to Amsterdam route offers the temptation of exploring a large city, this sailing terminates at a small, quaint port town.

Esbjerg is the fifth largest city in Denmark but has more of a small-town feel than a city vibe.

My biggest question on this radically different mini cruise was what could I do in half a day in Esbjerg?

Esbjerg is a small city in Denmark with a strong maritime heritage. It is not the biggest of tourist ports, but there's still plenty to see and do to immerse yourself in their rich culture.

The Men at Sea attraction is by far one of the most significant in Esbjerg. It is an art installation featuring four nine-metre tall statues seated overlooking the vessels leaving or entering Esbjerg harbour. I had seen photographs of the artwork but could not comprehend the scale.

Across the road from the Men at Sea statues is the Fisheries and Maritime Museum which is popular with families. This museum documents Esbjerg's maritime history but also features a seawater aquarium with fish found in local waters. There is also a seal enclosure featuring both common seals and common harbour seals. Visit at selected times for an opportunity to feed the seals.

Art lovers should visit the Esbjerg Art Museum which has been recently renovated and features one of the finest collections of modern art in Denmark.

For more history on Esbjerg then a trip to the Esbjerg Museum is a must, where the ever-changing exhibits tell the story of the main parts of Esbjerg's history.

Esbjerg is not short of architectural sights either. The Esbjerg Water Tower should offer fantastic views over the city but sadly was closed when I visited.

The Esbjerg Railway Station is another attraction of architectural significance. Built in 1904 this building features two turrets framing the entrance.

For modern architecture then the Elsam A/S Esbjergværket Blok 3, one of the tallest buildings in Denmark, is an unusual attraction. The chimney soars 250 metres into the sky.

I walked along the mainly pedestrianised high street which seemed to cater mostly to fashion addicts. I expected to see a few more global brands than I did but there was plenty of choices nevertheless.

The high street was lined with plenty of clothes rails and was busy though it didn't feel overcrowded. It had a sense of personality but familiarity too.

There was a distinct lack of reasonably priced restaurants for dinner. I ended up in Jensen's Steakhouse, a restaurant specialising in barbecued meat dishes. I was fortunate to get a table overlooking the ever-growing queue of diners outside - a good sign of quality.

The food was tasty, generously portioned and excellent value. The restaurant felt similar to a branch of Pizza Hut, with a salad bar at the heart of it.

For authentic Danish meals, primarily fish-based dishes, there were a couple of other restaurants I found that would suit. The cost of these was substantially higher. Opt for the set two- or three-course meal to keep the costs down.

These are only a few of the top attractions. Esbjerg has more to see, including parks, galleries, churches, museums and more.

At the end of the day of return, a coach transfer took me back from LEGOLAND Billund to Esbjerg port. As part of this mini-cruise I had the same cabin for the duration of the sailing, so I didn't need to check-in again.

There was no seating in the terminal. I had arrived around ten minutes before boarding commenced did not have to wait long.

Boarding was swift, helped by eager passengers desperate for a seat.

The staff onboard Sirena Seaways pride themselves on punctuality, and the ship set sail on time. The weather leaving Esbjerg was patchy, with a little drizzle and a strong wind which meant there was very gentle rocking on the return journey but nothing too noticeable. There was a strong crosswind as the ship sailed out of the port but this tapered off as it turned to sail back to Britain. The ferry was carrying a nearly full load of cargo which helped weigh the ship down cutting through the waves rather than riding on top of them.

Sirena Seaways arrived back in Harwich at midday, greeted with glorious sunshine and a very light breeze.

Disembarking was swift, with a slight queue at the UK Border Agency checkpoint. A member of staff was waiting at the very end of the terminal, helping directing passengers to the exits and the correct platforms for onward rail journeys.

Route closure: In 2014, DFDS ceased operating its Harwich - Esbjerg route, and its LEGOLAND mini cruise breaks. To travel to LEGOLAND Billund or Denmark by sea from the UK you now need to go via France or The Netherlands.
3.4

Most tourists arriving by ferry head onwards into Denmark. While Esbjerg does not boast the same level of attractions as a city like Copenhagen does, it is very proud of its maritime heritage.

Posted on Thursday 26th May 2011Friday 18th September 2020 by David Fiske
(Photo credit(s) to David Fiske)
Disclosure: DFDS kindly supplied a half board mini cruise to Esbjerg and LEGOLAND Billund. I paid for travel to and from the Port of Harwich, car parking, and incidentals onboard and overseas. The opinions in this article are my own.

2 comments on “Guide to Esbjerg, Denmark”