Sirena Seaways is a small ship, but there is enough onboard to keep everyone occupied at sea. 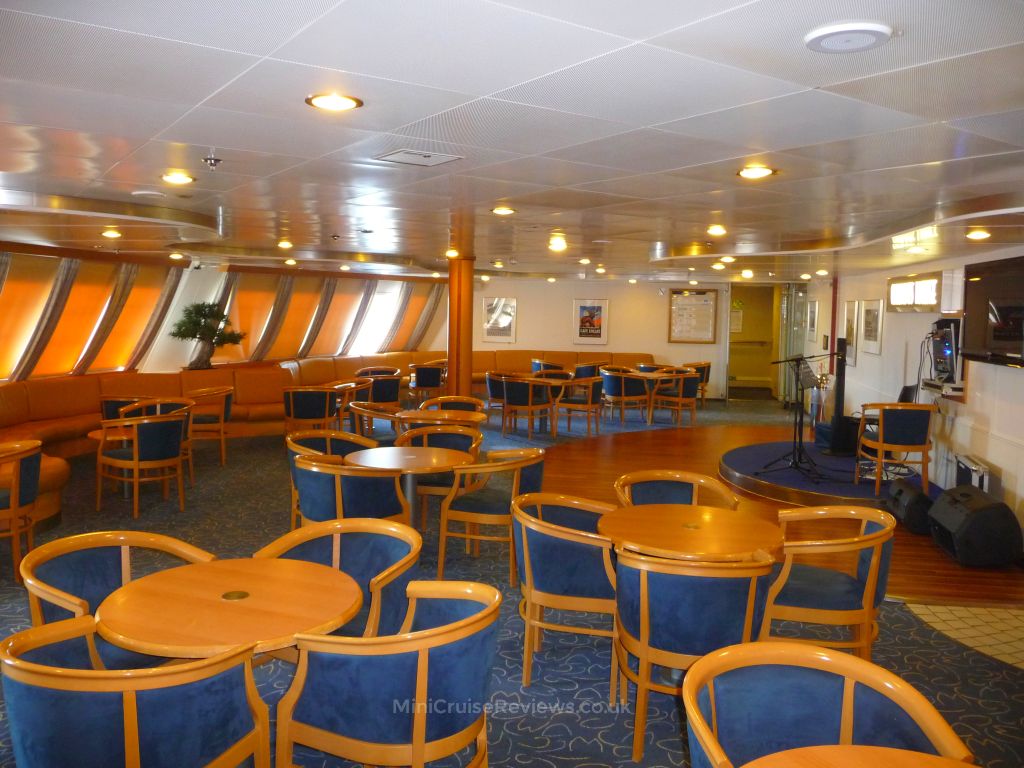 Entertainment on the vessel is somewhat limited due to its size and purpose.

It lacks some of the onboard entertainment that other ships in the fleet such as King Seaways offer, but it makes up for it in other ways.

There is only one bar onboard, and that is in the Columbus Lounge. On both sailings I found this to be a popular choice with travellers. The live entertainment on offer is unmissable. The talented entertainer was a dab hand on the guitar, singing soulful classics on the outbound sailing and upbeat melodies on the return journey. His repertoire included nostalgic classics as well as more modern tunes.

Most cabins have televisions and to compensate for the limited entertainment, the ship offers an on-demand movie package. On my sailing, the package cost £10 per crossing. It included a selection of around 20 recent films (plus three adult channels). There was a wide choice of genres from action to comedy, some suitable for adults and others intended for children.

Guest Services also offer a movie package which includes popcorn to nibble on while watching some of the latest films to hit the screens.

There is one shop onboard which combines the same sort of merchandise as found in the three separate stores on King Seaways (duty-free, clothing, and toys).

There is a good range although the lack of space means that they have had to be selective with what they choose to stock.

Commodore De Luxe passengers have access to the exclusive Commodore Lounge at the rear of the vessel overlooking the cargo area. This warm, inviting and relaxing space, is full of comfy chairs and soft sofas to relax upon, and there are plenty of newspapers to read through.

I even found a book documenting the interesting history of DFDS which might sound dry on the face of it but was a fascinating read. A flick through the visitor log is a must if only to read some of the hilarious entries.

A computer allows (slow) internet access, and there's a large TV that was switched off during both journeys.

Drinks (coffee, fizzy drinks, water and alcohol) are all complimentary which seemed to tempt a few passengers out of their cabins! Snacks such as authentic Danish pastries are served at selected times throughout the sailing although peanuts and fruit were available throughout. Breakfast is available at the Commodore Lounge for passengers who choose to dine there instead of the main buffet restaurant.

Keeping the children entertained on a long journey such as this can on the face of it seem daunting. However, DFDS has tried to ensure that it occupies even the littlest travellers.

There is a play area where children can make new friends and mess around. It is a bright and colourful space and was a big hit with the kids on both sailings.

During the Summer months, a dedicated children's entertainer is onboard who runs the Kidz' Club. The club offers fun filled activities to keep kids happy and busy.

The entertainer wasn't onboard during my sailing. Nevertheless, staff at Guest Services organised a treasure hunt where children and their parents had to follow a series of clues to find answers to questions, with prizes at the end.

Child safety is a priority onboard, especially as the route is very popular with families heading to LEGOLAND. The staff are well versed in dealing with large volumes of children onboard. Lost children can go to Guest Services where an announcement can be put out for their parents. The staff are friendly, understanding and very willing to help.

Route closure: In 2014, DFDS ceased operating its Harwich - Esbjerg route, and its LEGOLAND mini cruise breaks. To travel to LEGOLAND Billund or Denmark by sea from the UK you now need to go via France or The Netherlands.
4

On a small ship there isn't the space to provide the type of entertainment found on bigger vessels. Even so, there was enough here to keep me busy.

Posted on Monday 23rd May 2011Wednesday 28th September 2016 by David Fiske
(Photo credit(s) to David Fiske)
Disclosure: DFDS kindly supplied a half board mini cruise to Esbjerg and LEGOLAND Billund. I paid for travel to and from the Port of Harwich, car parking, and incidentals onboard and overseas. The opinions in this article are my own.